Note: Best played in Chrome. Has known issues in Firefox.

A dark souls-inspired 2D action game with only bosses. Overcome the darkness in the world and walk into the light. Best experienced with headphones. Find the soundtrack here.

The GDWC3 years ago

Very interesting game! The music really created a great atmosphere and it was visually very nice. I did think it was quite difficult to play but it was an enjoyable game :D

I don't know if you've heard of Game Development World Championship before (gdwc2019) but it's a competition for indie game developers where they can submit their games and it's free! It's great if you want some more visibility for the game and it only takes a couple of minutes to join :)

As a player, the enemies are too hard and you have such little HP. I had no problems with the controls and I like the sound effect for the dash Wossh...Besides the hard enemies I found the game a good one, with well done graphics and use of lighting.

Thanks for playing and for the feedback! I'm glad you enjoyed the sound effects, graphics and lighting. I've now specified in the description that the game is inspired by similarly difficult games to help set expectations, and will also add a mode by the end of the day where enemy HP will be lowered for those who want a different experience. I understand that the high difficulty is for a niche audience!

Edit: Assisted mode is up and running! See the description for details

Hey; i don't know if you're still on itch.io, but i wanted to give some criticism. I'm a month or two new to the souls franchise, but i've logged a solid 200 hours between the 3 of them (3 playthroughs ds3, 2 ds1, 1 ds2). This game isn't really a souls-like; there's no telegraphing on attacks (take beast for example, sometimes he just.. explodes? its a gamble of holding L) or the upper boss, Sell? idk what his name was. he just slaps at random times (but i havent thrown many attempts at him; i dont know) and the 3rd one, the shadows. not being able to see a boss isnt a good design mechanic; its kind of annoying. I get it, you need to split them up, but unlike fights like Ornstein and Smough where there are pillars and the arena is unique to help, theres no such thing here. 3 hits is way too unforgiving, the 'high difficulty' isnt difficulty so much as random attacks and absurdly high hp for obnoxiously long fights. Assisted mode seems like a much better base experience, and its not that the high difficulty is for a niche audience, its for an audience that wants to not have fun. I get that this is your second game, so no hard feelings or anything; developing is tough, im learning to program myself. But frankly, for an only bosses game, the bosses arent that great. Your last post was over 3/4 a year ago, so i doubt you'll respond; but i wanted to say this anyway.

Hey dude! Thanks for the criticism. All the games I've made are pretty much just for the fun of making them. I make them collaboratively in a community of others who are also looking to learn and enjoy the experience of making games together. If I do decide to take game development seriously however, then I will likely give a lot more thought to the gameplay design and elements and your criticism will hopefully be useful, so thanks :-) I hope you're enjoying your own programming journey! Praneil 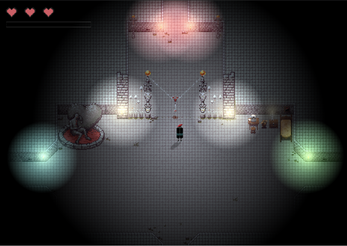